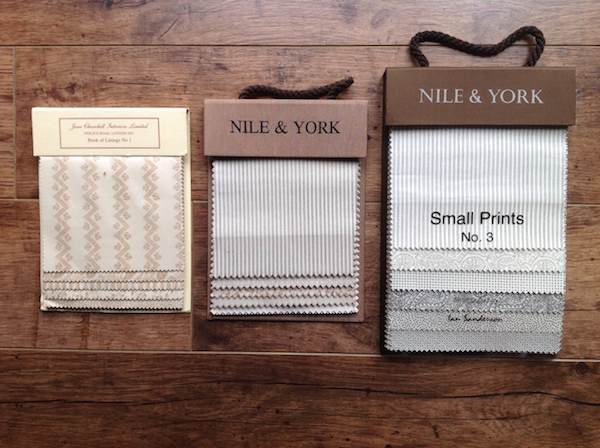 The photograph shows the Pattern Books that have been produced in the past including what is now just named Small Prints.

The first pattern book (far left) was produced in the early 2000s with the help and considerable input from international interior designer Jane Churchill. It was made up of six designs produced in the same six colours, using the weight of the designs and the colour of the chintz finished ground to create 30 fabrics in the range.

In 2007-2008 Ian Sanderson asked if they could get involved and took on the job of distributing the range, which they did until September 2015. Two new designs were added and some removed to create a new book (centre) containing 25 fabrics across four designs.

The Small Prints range was introduced in late 2011-12 (was Book 3), adding another five designs to create a total of 63 fabrics, all of which of course are held in stock. Still manufactured in the UK, the Small Prints range has become something of a classic, with all the designs remaining in popular demand.